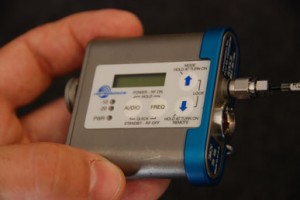 I’ve been using SMD/a style transmitters from Lectro for a while now and have found them to be a very valuable tool in my sound arsenal. While they aren’t as small as the SMa’s, but they do offer a better balance of size and battery life for the type of jobs I tend to do.

The SMQV is Lectro’s latest offering. A variable power transmitter that is in the same form factor (and in fact replaces) the SMDa, SMQa (as well as replacing the UM450).

Now, most people are now familiar with the SM line of features, so I’m going to point out what is new in this transmitter. I will say that the SMQV performs just like the SMa series except for the following differences:

All in all, I really like the new SMQV. While I like the option of variable power settings, in reality, I bet I’ll keep it at 100mw 99% of the time, but it’s nice to know it’s there when I do need it. My favorite features are the auto-on and the removable antenna. I know that will come in handy more often.